Some pictures from the protests in Iran

Looks like things are getting crazy over there. I guess they are clamping down and trying to prevent pictures and videos from leaving the country. They have International reporters locked in their hotel rooms etc...

Here are some pictures that leaked out....amazing if you ask me. 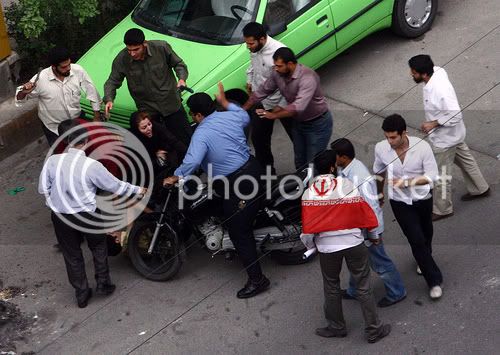 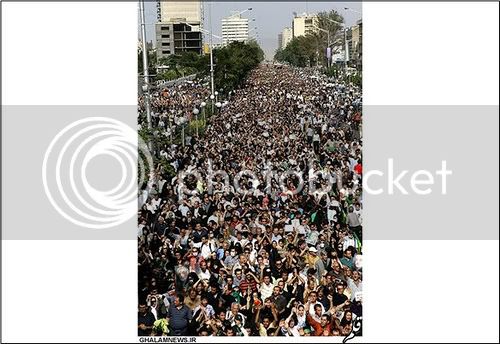 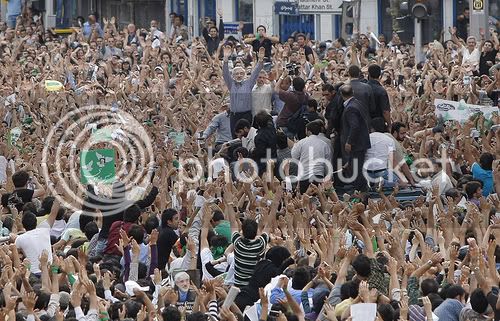 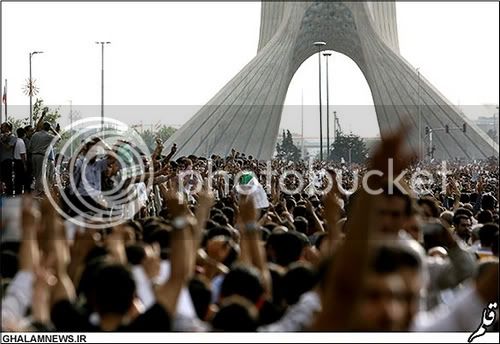 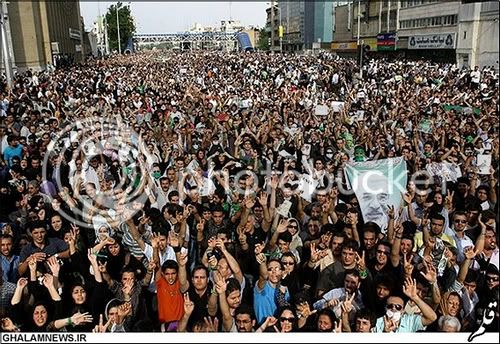 I approve, she obviously got out of line.

It's an absolute damn pity at how badly (American) news organizations are covering this story. CNN is probably the only channel I'd give my kudos to, but that's after the Twitter outrage.

Sorry I didnt see the previous thread....anyway read this..it is a timeline over the last few days...really interesting and scary stuff

Timeline (updated and revamped!)
note: I built this through both articles and twitter feeds, so I do not claim that this is a 100% factually correct representation of reality, but this is the general narrative.

14th of June - While the previous day had been witness to some protests, they were for the most part peaceful. However, as time grew the protests turned more and more violent. When the first spontaneous riots erupted, the first wave of violence was unleashed. The Iranian Riot Police was called in to support the regular police officers controlling the protests, and shortly after the Basij also took the scene, moving from a passive to active role of repression. The RP concentrated mostly around public buildings and streets while the Basij took position around student groups, especiallly universities.

- As things got more out of hand, more and more Basij troops were called in, as the police started dispersing. The riot police are less inclined (or, rather I should say the Basij are more inclined) to use violence so they retreated and leaving the place to the Basij. The repressive forces concentrated their assault mostly around the main Iranian universities, while the riot police were concentrating on protecting various government buildings such as the Interior Ministry. At least two people had been killed already.

- On the telecommunication front, this is when we started to hear more and more from twitters while videos were being freely updated to youtube (while youtube started to delete the more violent ones a few hours later). This is also the moment where the government realized what was happening, and ordered for the internet, phone lines and cellphones to be cut off, in order to avoid people communicating with the outside world.

late 14th, early 15th of June - This is the second wave of violent repression. At this point, violent riots had spread all over the main cities of Iran. The violence against citizens was not only the fruit of the Basij anymore, but also came from Ansar Hizbullah members. This is the point where firearms started being used. There were reports of a few murders but it was mostly fired in the air or on walls in order to scare away protesters in University dorms. It's also around the same time that the first reports and videos of an important number of non-Persian thugs shouting in Arabic and violently beating people with chains, clubs and electric batons (similar to cattle prods), which led to many speculating that lebanese Hizbullah members were now in Iran. Der Spiegel, through Voice of America, later claimed that 5000 Hizbullah fighters were passing off as Riot Police, validating the claims of many independent sources and twitter feeds.

- Universities have been the hotbed of protests, serving as a hub of anti-government demonstrations and preparations. 120 teachers from the Sharid University resigned in protest over the election results. Perfectly away of this, the Basij, Ansar and possibly Hizbullah members concentrated their attacks on University Dorms all over the country, storming them and beating students, destroying everything, especially computers.

- The end of the second wave came right before the beginning of the current manifestation. Things were getting quieter with only sporadic reports of dissenters being assaulted. Important to note: at this time. the Supreme Leader authorized the plainclothes militias to use live ammunition against the crowd if things were to get out of hands. By the end of the first two waves of protests, hundreds of people had been arrested.

midday, 15th of June - This brings us to the third wave, which just began around 12:30PM for those of us on the East Coast. Plainclothes militia opened fire on civilians protesting peacefully. Possibly up to 2 million protesters took the street. Chaos erupted in the streets, with reports of fighting all over Tehran and spreading over Iran as the news circulated. Pictures of people shot, some to death, finally surfaced and were published in the mainstream media. Violent and murderous repression has started. At least a twenty people had been killed at this by the end of the 15th of June.

- There is a major national crackdown on students, especially those with connections to the outside world going on right now. Students are fighting back in some areas. Telephones are being bugged and everyone twittering and sending videos outside of Iran are being rounded up. ISPs were shut down, government hackers are threatening people who twitter, and some of them have vanished in the last 24 hours.

- Eventually, the people started to fight back. First, they took over and burned down a Basij base, killing its commander. Later, a Basij shot a young man in the face in front of their HQ, at which point a policeman went to confront them. The Basij beat the policeman, at which point students stormed the compound, throwing molotov cocktails, burning it to the ground.

- During the night, the police entered certain neighbourhood to arrest public servants and force them to appear at tomorrow's pro-Ahmadinejad manifestation, but the people went out in the street and forced them out of their neighbourhoods. The Basij have kept on storming dorms. So far the reports are conflicting, but it appears that the death toll could be as high as 40 for the protesters, with two dead on the side of the repressive militias. This is the end of the third wave.

early 16th of June - Supporters of Moussavi have a manifestation planned for 5pm, Tehran time. Roughly the same number or more is expected to attend. People are dressed in black and told to protest silently.

- The pro-Ahmadinejad crowd however are planning a counter-demonstration at the very same place the supporters are supposed to gather at 3pm. Most agree that basically they are simply going to gather for a confrontation. Rumours are that they are taking position in buildings next to the parade and in bunkers to attack. Basij from all over the country are moving to Tehran and supporters are being bused from all over the country. A major showdown is expected to unfold.

- The crackdown on people using telecommunication is as strong as ever. Anyone with a laptop, camera or cellphone is attacked in the street by plainclothes militias. Tehran hotels are under lockdown to prevent the members of the foreign press not yet expulsed from reporting what is happening.

- As for the Iranian Government and different branches, there are rumours that many Army Generals have been arrested for plotting a Coup d'Ã‰tat, but this is still speculation at this point. The Supreme Leader has also called for a 10-day inquiry into the claims of fraud, but it has been widely dismissed as cosmetic. Moussavi and his supporters have rejected this, claiming that they want new elections. Khameini is now using the armed Basij as his own bodyguards, hundreds of them are surround him and his residence to protect from attempted assassinations. Ahmadinejad himself is in Russia right now, for a planned visit, and tries to pretend that everything is good as usual.

early 16th of June - The fourth wave of violence has started, and it is expected to flare up very soon. Currently pro-Moussavi supporters are saying that there are even more people today protesting against the regime, though raw numbers are hard to get. If this is true, it means there are more than 2M protesters in the street right now. They are dressed in black and protesting silently and without violence so far. Other reports that only 250,000 are in the street right now, possibly scared by the Basij and propaganda.

- The Basij, surprisingly, are not attacking the march itself but rather they are assaulting dorms again. It looks like they are using the march as a diversion. In Tehran proper, 2000 Basij are waiting to storm the male dorm, and they are backed by IRG helicopters, which seems to send the message that the IRG has broken from their undeclared neutrality toward tacitely supporting the Regime.

The Revolution lives on.

Things are crazy over there. Didn't the guards just shoot into the crowd to disperse them? Reminds me of that movie rules of engagement except the crowd was actually a peaceful demonstration

The most shocking thing is president Ahmadinejad who won has went off to Moscow amid all of these troubles
You must log in or register to reply here.
Share:
Email Link
Top