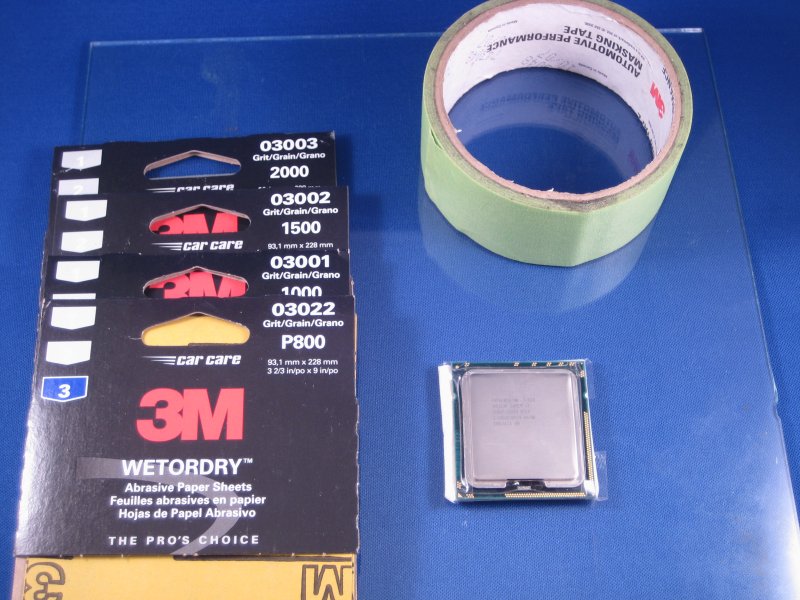 I start preping the cpu by taping around the heatspreader I then take the toilet paper and business card and cut them to the approximate size of the cpu.

I place the toilet paper on the back side of the cpu and then the piece of business card goes on top. 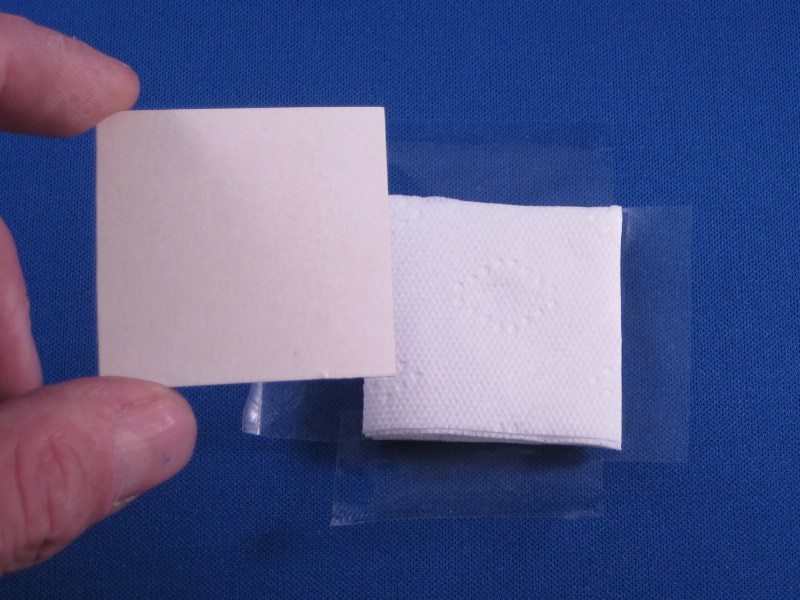 Then I fold the tape over to hold everything in place. We'll start lapping the cpu with 800 grit paper. Tape a sheet of 800 grit to the pane of glass and lay the cpu, heatspreader side down on the paper and were ready to begin. I like to make 10 passes and then rotate the cpu a 1/4 of a turn. Here are a few pictures showing the progression. 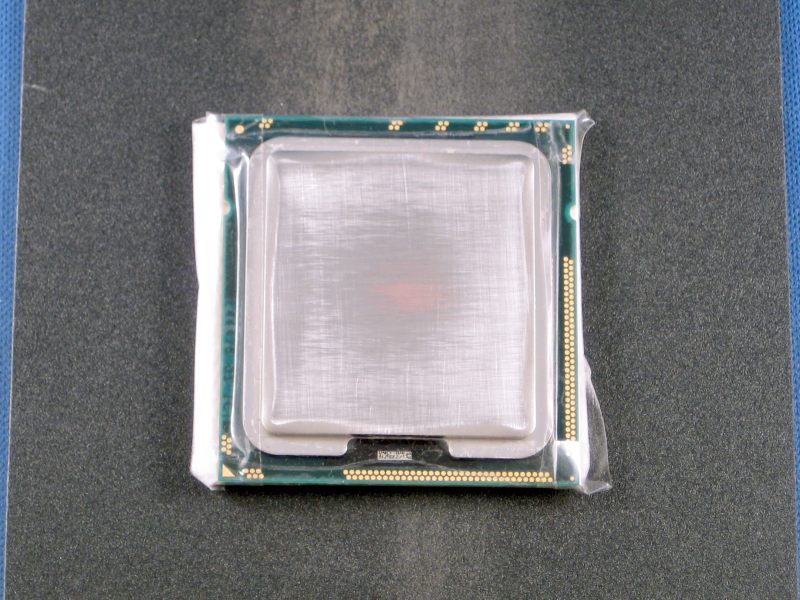 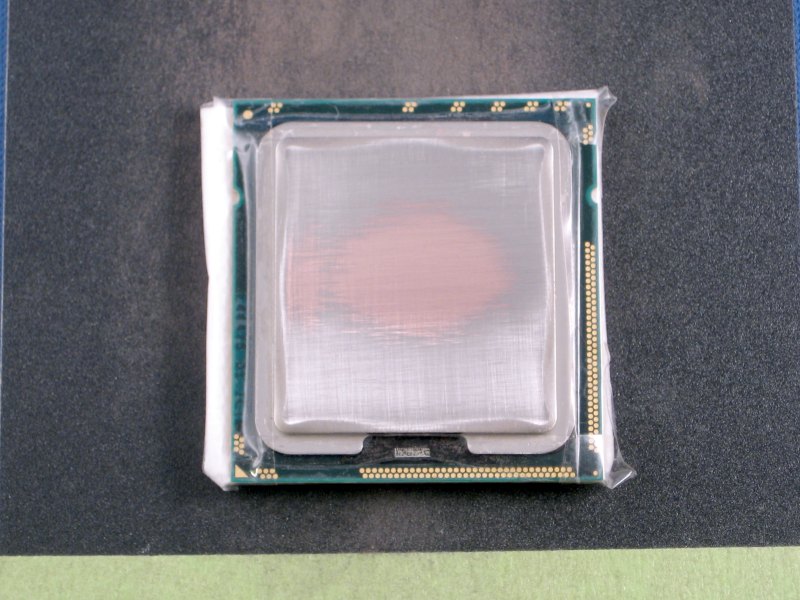 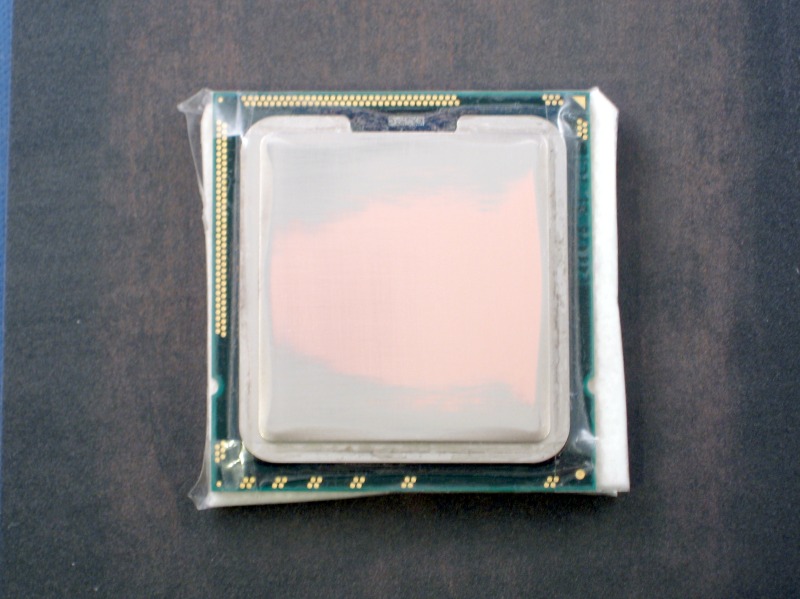 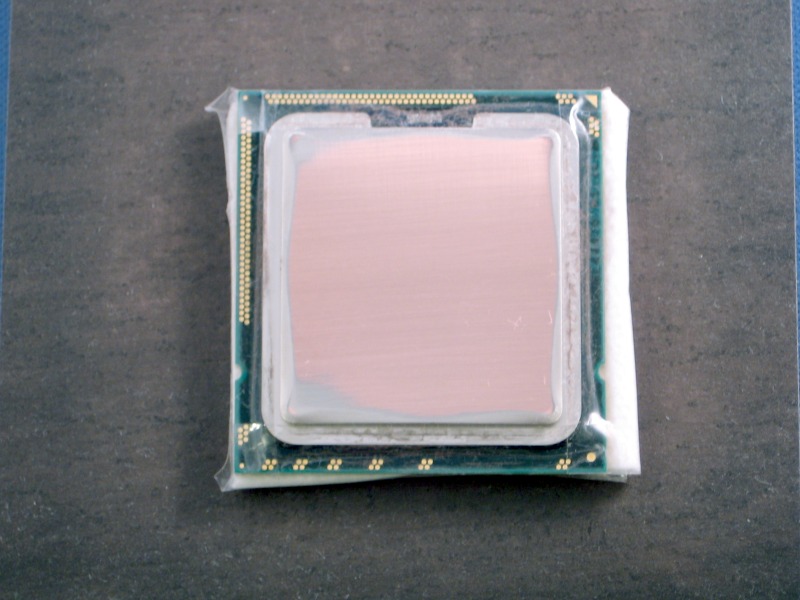 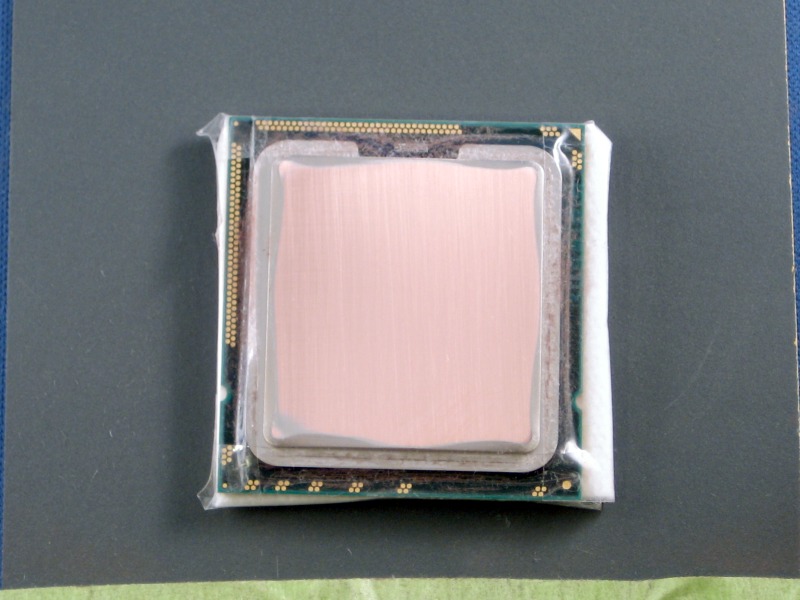 Using 1000 grit I continue rotating the cpu 1/4 of a turn for every 10 passes. When the entire heatspreader is flat and smooth were ready to switch to 1500 grit. These pictures didn't turn out as well as I would of liked. You can't see it but the heatspreader is now showing a blurry reflection. After moving to 1500 grit and following the same 1/4 turn after 10 passes I continue until the heatpsreader is producing a sharp, but slightly scratchy looking reflection. Moving to 2000 grit paper I follow the same procedure until the heatspreader produces a super shiney reflection. Remove all the tape, using compressed air clean the cpu throughly to remove any lint or metal flakes and your ready to go

Neat guide. I've been wanting to do my first attempt at lapping too, on an E2140.

You don't use that black plastic CPU cover that comes included?

b1gapl said:
You don't use that black plastic CPU cover that comes included?
Click to expand...

Great guide slay. I appreciate how thorough you are with everything, and though I have been lapping for a while now, every processor (except for an old AMD Athlon 64x2 6400+) I've ever had, even the IC2Q QX9300 mobile chip for my old notebook, I commend your efforts to bring this into the realm of common knowledge, and I always find myself reading your guides over in anticipation that you may have found out a new technique or trick. I have always been impressed with how your guides are so approachable and understandable. Thank you Slaymate.
F

there was in fact no plastic cover... I don't know why.

As I switch to a different grit of paper I'm actually just sanding out the scratches left from the previous grit. If you start with 200 or 400 grit then you tend to get really deep scratches which may actually require you to sand off more of the heatspreader than is necessary. I like starting with 800 grit, 600 grit would be OK but I wouldn't use 200 or 400 grit
C

is it necessary to lap a processor? what does lap do i mean will it decrease the heat from the processor or something? this question goes to a cpu cooler as well.

thank you and very nice guide.

corei5 said:
is it necessary to lap a processor? what does lap do i mean will it decrease the heat from the processor or something? this question goes to a cpu cooler as well.

thank you and very nice guide.
Click to expand...


For normal usage most cpu's and heatsinks do not need to be lapped. But occasionally a cpu or heatsink may pass thru Quality Control with surface defects that require lapping.

For the Overclocker Lapping is done to improve the thermal dissipation between the cpu and the heatsink. Here's a picture to use as an example, on top is a simulated lapped cpu & heatsink and on the bottom is a simulated non-lapped cpu and heatsink. You'll notice that the non-lapped example has numerous dips and ridges that keep the (2) surfaces from mating together perfectly. Thermal paste is used to fill in these dips but it just isn't as effective as direct contact. When you lap the surfaces you are removing some of the imperfections (it is impossible to remove them all, so you still need thermal paste) which increases the direct contact surface areas of the cpu and heatsink. The more direct contact between the (2) surfaces means increased thermal dissipation or a Cooler CPU. A Cooler CPU means I can make it run faster

Thanks allot for this info, I personally have never heard of this(Lapping). but i can see how it makes sense, better contack better heat trasfer More possibility to OverClock

Can you say carpal tunnel?
2