Not uncomfortable when you're a shortie like me haha. I'm also really fond of wooden furniture, to begin with.

A wooden chair is comfortable enough to sit down for a meal but I wouldn't want to sit in it for hours on end.

I worked from home the last 10 years or so of my career. When I first started working from home, I used one of the wooden chairs from our dining room to sit in. After 8 hours of sitting in that chair, my tailbone was really sore. I asked my boss if I could bring home a chair from the office to use but was told no because the office furniture belonged to the company the building was leased from. However, my boss told me to go ahead and buy an office chair and expense it, which I did. I used that chair for the rest of my career and only replaced it recently. It was a whole lot more comfortable than that wooden chair!

We have wooden furniture for our dining room and I can't sit on them for more than 10 minutes without getting sore. I have to readjust constantly just to finish eating.

We use wooden chairs for our dining room. We can sit at the table for a while playing games and such. They are what you might call a country style, the type with a taller oval shaped back and the seat area is kinda dished out too.

I liked my setup before I got with my current, a fold up table with computer chairs lol.
L

Sometimes Best Buy is the place of the best tech at the best prices. However what I experienced recently is quite the opposite. Recently my old iPad Pro 9.7" 1st generation shattered in my bag and I knew I needed to get a new ipad to remain doing work during my college semester. Best Buy Canada had sweet deals on open box geeksquad iPad Pros and I immediately went for an open boxed geeksquad verified 2020 iPad Pro 11" 128gb 2nd Generation for around $450 CAD through a guest order since I forgot what my original Best Buy account was. What a steal right! I was so happy since I have a needed replacement for my old ipad and for cheap too. For context this was on last Thursday (10/28/2021). Three days later (10/30/2021), I was wondering why my order was still in progress. So I decided to contact support and sure enough they went to check on and it told me within 24hrs I would receive an email for an update. 24hrs past and I didn't get an email so I checked my order status and poof it was cancelled without context. I was furious, so again I contacted support and they told me to read the email they sent out (I never received this email until 7:02pm the next day (11/01/2021). They kept telling me to do so and I just gave up. Finally on November 1st 2021 (today) I called in and asked why my order was cancelled. It was due to data not matching my bank account. I asked to verify the data I entered and it was entirely correct. The bizzare thing they told me was that my bank account email did not match my order email. WHEN DID THIS BECOME A THING. I ordered through guest check out before and this never happened. Now I can't even reorder the product since it sold out ever since I bought it. This is absolutely retarded.

Now you know why people hate best buy.
They probably never had one to sell you, They just did not update their web page. I still see best buy adverts for a Ryzen 3 3200 cpu for $99. but when you check it is not there.
Last edited: Nov 2, 2021

We bough it to our office last year it was good

Been on a buying spree lately, and at the same time have obtained a lot of goodies from a buddy that works in a NOC that is doing a full refresh.

Several(half a pallet worth) boxes of Panduit branded patch cables, in various lengths, colors, and some those nice thin ones as well

Had a huge overhaul of my closest and rack in the end. 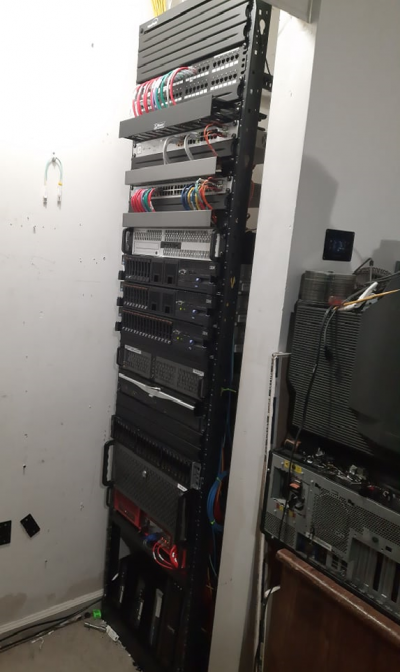 Razer Viper Ultimate Wireless Quartz for the wife's birthday. I know, I never buy Razer shit, but she wanted pink.
You must log in or register to reply here.

H
Psychos 'R' Us: A genuine tale of stalking!