I have setup my PC to have dual booting with Win XP MC OS on a SATA hard drive and Win XP Pro OS on a separate (IDE) hard drive.

I have no problems booting up in either OS, however, the problem is that the drive letterings are DIFFERENT depending on which OS is working. I am concerned because I may run into problems when I try to restore a drive after a failure etc - I could mix things up and end up ERASING the wrong drive !!

Let me be more specific in describing my set up since this might be critical in your assisting me.

Like I said, the Win XP MC OS is on a SATA drive which is on my Intel motherboard. This drive has 2 partitions on it.

This IDE cable is attached to an Adaptec ASH-1233 ULTRA ATA/133 PCI card since the Intel board had only 1 IDE slot which is being used by my 2 optical drives (If I hook up the optical drives to the PCI card the computer was telling me in the boot menu that there were no optical drives - so I had to hook them up directly to the motherboard).

As I said, despite the "confusion" above, I have no problem booting up in either OS and running the 'computers'

The letterings I get are as follows :-
(I am listing them so that the drives correspond in each OS)


The first question is why the differences and how are they accounted for?

The real question though is - can I change the lettering and if so how?

Another question is do I need to? and if not then how can I avoid problems later if I leave them the same way?

Thanks in advance for any help I can get with this confusion !!

Okay i dont get it? What is the letter as they are seen under SATA and under IDE. I see a bunch of letters but none of it makes sense. C: C: G:

What does all that mean? Go this way.


Soemthing like that and tehn go the same route with the IDE Drive. That way we can figure out what is going on.

Im not sure how to fix your problem, but whatever OS you boot to is ALWAYS going to show up as C: thats just how windows works. I dual boot vista64 and xppro and basically the only things i keep on those drives is the OS, all of my data resides on e and f because those drive asignments dont change.
R

It is not as confusing as you think!!

I had things in rows and columns with the first Column of letters refering to the OS on the SATA drive and the second being the OS on the IDE drive.

What happened is that when the post went to the preview my columns and rows disappeared !! Anyway, using you suggestion the lettering is as follows :-


Now when I am using the Windows XP Professional OS

I hope this helps in your assisting me.

Will there be any consequences to my changing the letters as you suggest? Will this not affect the paths to programs/files etc or will that be modified accordingly as I make the changes in the lettering?

I still can't follow your chart, But the letters are changing because your booting from 2 hdd. It's view of the remaining partitions are going to be in different order. I'd start over and put both OS on one drive, this should look at remaining multi partitions and drives as the same, wether you boot from one os ar another.

As long as the system drive letters stay the same you can reletter them so they match each other. That is all that matters is the system drive. If you were to change that (Which you cant anyways but still) all teh software you isntalled would not work as it would try to run C:\.... when it would have been changed to D:\....

So as long as you keep the system drives the same. You are fine.
E

veedubfreak said:
Im not sure how to fix your problem, but whatever OS you boot to is ALWAYS going to show up as C: thats just how windows works. I dual boot vista64 and xppro and basically the only things i keep on those drives is the OS, all of my data resides on e and f because those drive asignments dont change.
Click to expand...

no it won't, if you have a dual setup without a bootmanager. I use pm to set my dual boot, just so that each windows partition stay at c. vista has a bootmanager. if you do 2 xp's in this setup, the second one can be d,e ,f etc.

I would use partition magic to do my dual boot as it will hide the unused xp drive, then I would use computer management to fix my other drive. that's my set up on a few computers. pq boot for windows will let you boot to whatever os that you want

my setup. notice that xp 64 bit is hidden 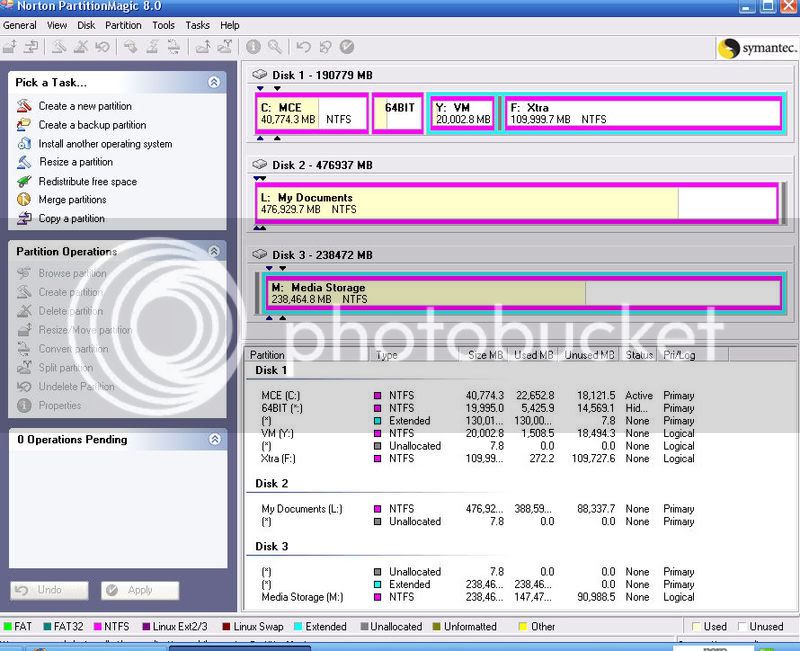 Another easy and viable option is XOSL. It is very user friendly and does everything you would ever need. Plus it's free!

Basically what it does is when it boots, it will give you the option of which OS to boot to. Whichever one you choose, it effectively masks the host hard drive to show as letter C. That means that when you are in MC, the SATA will show up as your C: drive and when you are in XP Pro, the IDE will show up as your C: drive. This program tricks the computer into thinking that the drive (which may actually be D: or E: on one OS) to show up as C: for the current OS that you are running. It works fine and never has any problems so far. I use it on 75 laptops at my place of work.

You can find info and downloads at XOSL: Extended Operating System Loader