The Opera team released a beta version of Opera 9.20 to the public yesterday. The new version comes with several new features and fixes that are worth taking a closer look at. It looks pretty stable to me and I did not witness crashes so far, you should still be aware that this is a beta version. The release notes line out the new features and fixes of Opera 9.20 beta. The most important features that are introduced is the so called Speed Dial Feature and the integration of Developer Tools. There have been several security and stability fixes as well.
As I said earlier Speed Dial is probably the most interesting addition to Opera. Every new tab that you open displays up to nine websites that you have chosen showing the actual content of that website in a thumbnail. Clicking on a thumbnail or pressing CTRL + [1..9] loads the website in full screen. This is actually a very clever way for users who visit a number of sites often to check if anything new happened in the meantime. Great for webmasters who visit their sites or want to keep up with news sites. The tab can be used normally as well. Take a look at the screenshot that I made below. 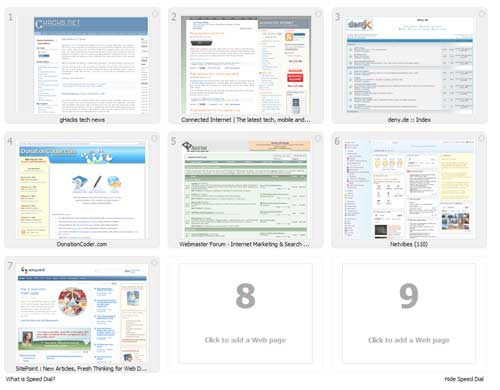 I think this is a pretty interesting new feature that is unique to Opera for now. Remains to be seen how long the others need to add it to their browser.

I have been using this for a couple of weeks now. Well the Speed Dial thing. It is very useful and nice to use. But other times it is a hassle.

Overall i have to say this is the best version to use so far.