My feedback, as you might have guessed from the title, is for the most valuable content to be up front.

On the homepage there would be 5 tabs...

How cool will that be? Any visitor will easily be able to find and enjoy the most valuable content that this forum has to offer!

On the right hand side of the page would be various checkboxes for popular categories. If the visitor is interested in seeing the most valuable threads within certain categories.... then they could uncheck boxes to filter out the threads in categories that don't interest them.

The gnitty gritty is how to determine value...

3. Market - micropayments... we spend our pennies, nickles, dimes and quarters on posts that we value

The problem with the second system is that, just because I like peanut butter doesn't mean that I'm always going to fill my shopping cart with peanut butter. There are many items at the grocery store that we'd vote for... but we don't put them all in our shopping carts every time we go shopping. "Liking" isn't prioritizing. You don't equally value all the things that you "like".

Imagine if Netflix allowed members to allocate their monthly subscription fees to their favorite content. Assuming a monthly fee of $10 dollars... then here's what one of my monthly allocations might look like... 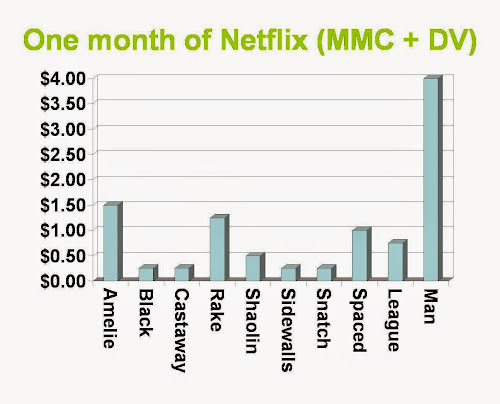 These are all movies/shows that I like... but clearly I don't value them all equally. I value The Man From Earth most of all because I perceive a significant shortage/scarcity of movies that are both educational and entertaining. How many other people are in the same boat as me? I don't know. Nobody knows. "Likes" don't accurately communicate value. So again, the 259,037 threads would be incorrectly sorted.

Which leaves us with the market. Markets are all about shopping (weighing/prioritizing/spending/sacrificing). Does the idea of shopping for threads appeal to anyone? Would you really like the opportunity to decide how many pennies this post of mine is worth to you?

Indeed, the mental transaction costs, aka cognitive costs, take a toll, even, or especially, for a 100 bit ($.003) transaction. This is why replacing ads with micropayments is a non-starter: far fewer people tip. It's not because they are miserly, it's because the act of tipping takes not only an extra physical step, but also exacts a mental toll. In contrast, ads are hassle free for the user. Micropayment systems have to address these mental transaction costs if they are going to have any longevity. - Emin GÃ¼n Sirer, Micropayments and Cognitive Costs
Click to expand...

There's no doubt that these websites are successful... but they aren't the future. All it will take is one forum where enough members are willing to shop for threads. The honest to goodness demand for threads will determine the supply of threads. There will be a larger and larger supply of content that's worth paying for. Visitors will easily find the most valuable content on the homepage and the internet will pivot accordingly. One small leap for this forum... one giant leap for the internet.

Programmatically it's not difficult to facilitate micropayments. A week ago I shelled out $60 bucks for hosting and spent a few days modifying the phpbb software and database so that members could click penny, nickle, dime or quarter buttons under each post. I launched the website a few days ago... here's a screenshot... 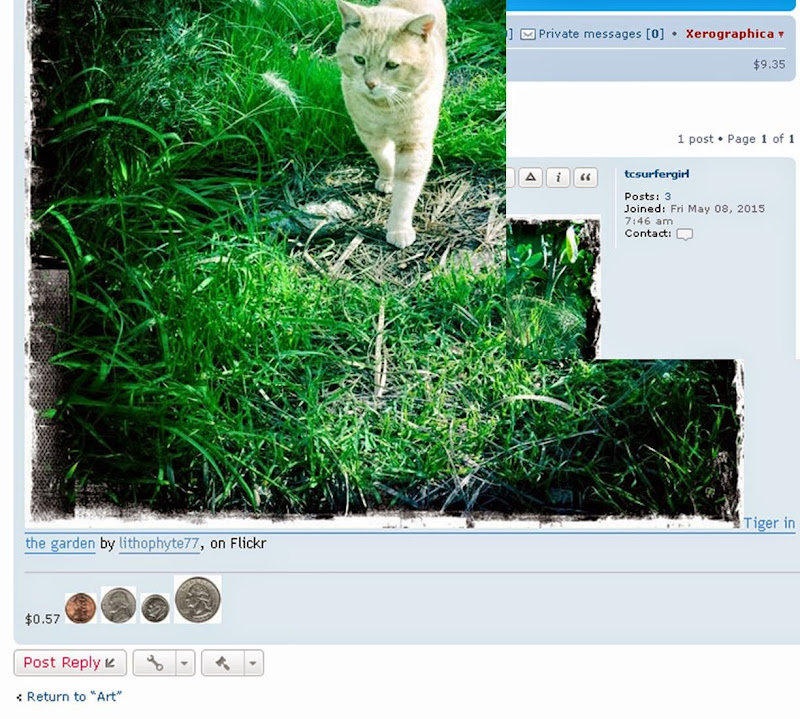 Yesterday I discovered $49,382,720.75 dollars in my wallet. Heh. Evidently some hacker tried to prove... something. What comes to mind is the story of the three little pigs. I'm the little pig that built the straw house. The wolf blew it down and proved that houses are a bad idea. Well... no. The wolf proved that I'm clueless about database security. I'm sure that all of you know more about database security than I do. My brain is mostly filled with economics. Which is why two heads are better than one!

The database security issue will never be perfectly resolved. But I think it can be resolved well enough to deter Joe Hacker. And by the time there's serious money involved... then serious money can be spent on serious security expertise.

A logical conclusion that people jump to is that this would result in the homepage being filled with advertisements. Yes... and no. Once we can spend money on posts then the idea of "advertising" as we know it goes out the window. When everybody can receive money for their posts/content... then everybody will essentially be trying to sell their content.

Let's say that I start a thread... "How can I avoid being hacked?" What am I doing? I'm offering a discussion for sale. If you want to know the answer too... then you'll buy my discussion by allocating a quarter to my thread. The quarter will go into my wallet and the thread will be 25 cents more valuable. The more people that buy my thread...

And then, when a visitor goes to the homepage and clicks the "all time" tab, they'll see "How can I avoid being hacked?" at the top of the list. The visitor will say, "Woah! I've always wanted to know the answer to this question!" So they'll click on the thread, sort the replies by value, and learn the most valuable answer. They'll appreciate the answer so much that they'll immediately sign up and allocate money to the thread and to the best answer.

If you're a hosting company, why not save up to get your thread in the week tab? Or the month tab? Or the year tab?

So yeah, the homepage will end up full of advertisements... but no, it really won't be a problem.

From what I read in this thread... "The future of Tech-Forums"... this forum is in need of a pivot. And I can't think of a more daring, exciting, dangerous and revolutionary pivot than allowing members to shop for threads. We'll all benefit from a group effort to put the most valuable content up front.

Clearly people are more than happy to freely share content. The 259,037 threads on this website are proof of this. But right now there are other websites... like Quora and StackExchange... that are winning at Internet 1.0 (altruism). But whatever altruism can build... incentive (Internet 2.0) can build even bigger and better...

But man has almost constant occasion for the help of his brethren, and it is in vain for him to expect it from their benevolence only. He will be more likely to prevail if he can interest their self-love in his favour, and show them that it is for their own advantage to do for him what he requires of them. Whoever offers to another a bargain of any kind, proposes to do this. Give me that which I want, and you shall have this which you want, is the meaning of every such offer; and it is in this manner that we obtain from one another the far greater part of those good offices which we stand in need of. It is not from the benevolence of the butcher, the brewer, or the baker, that we expect our dinner, but from their regard to their own interest. We address ourselves, not to their humanity but to their self-love, and never talk to them of our own necessities but of their advantages. - Adam Smith, Wealth of Nations
Click to expand...

If Bob, a member of this forum, takes the time and makes the effort to find and share content that we value... then it should be stupid easy to reward him for doing so. This will incentivize him, and others, to allocate more/time effort to supplying our demand for valuable content. The result will be a virtuous cycle of value creation. Threads on the homepage will quickly increase in value.

We've all got pennies. Let's put them to good use. 259,037 threads is way too many threads for any single person to valuate. But it's not too many threads for the crowd to evaluate. Given enough eyeballs, all Easter Eggs are exposed. We'll do the work of searching for and valuating Easter Eggs so visitors won't have to. Buried treasure is cool for movies... but not for forums.

It's spam because...?
You must log in or register to reply here.

Oct 19, 2021
AnnuSingh
A
A
Best Methods to Convert EML to PST File Format