Looking into possibility of Overclocking my new computer

Hey all, love the forum so far and just built myself a new computer a few weeks ago.


The computer is great. Everything runs well, except Crysis at max resolution settings for my 24" monitor (that was all resolved in my other thread, though.)

Question: I've been using RivaTuner and Everest to check out some stuff about my computer. From what it looks like, my temperatures are the following for the computer: 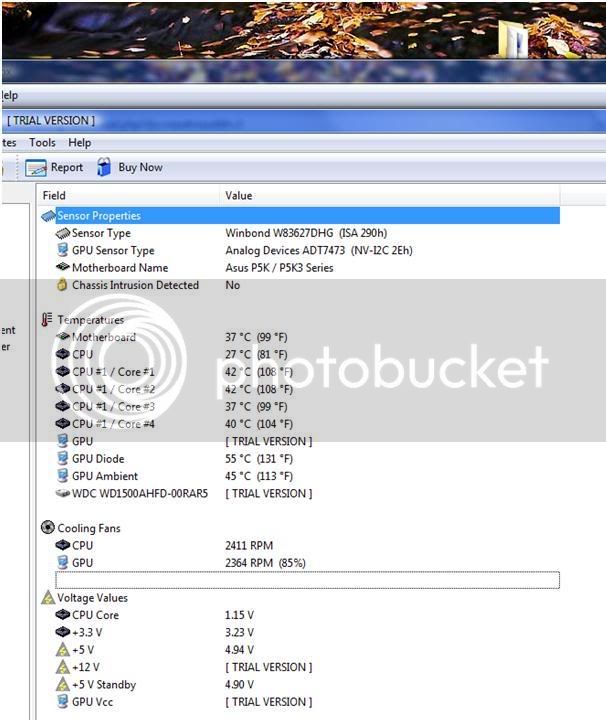 On my computer case LCD, the temps are shown as:

I don't think I have a need to overclock my graphics card YET, since it is flawlessly running almost everything I throw at it. I was kinda worried about my video card temperatures at first (58* 47* in Everest) so I set the fan speed to 85%, and the temperatures dropped a few degrees as shown in the picture.

I can say the same thing about the computer overall: it performs great. Thats where my dilemma is. I don't really have a REASON to overclock it, and I would really kick my self in the arse if I DO overclock and mess up something.

That said, should I consider overclocking at all? And if so, how should I do this? Can someone maybe recommend a setup (conservative) that I can test out with my new computer?

Any ideas/suggestions/comments will be appreciated.

Well,All your temperatures are fine,You COULD Overclock a bit with stock cooling.I Benchmark my pc's with a tool called Lightsmark 2007 Its a great program that gives yours PC an FPS Rating.

stock coolers will keep them cool...but if you want the best you can get you will have to upgrade your cooling at some point!!!but alot of computer mags get great results with the stock cooler...so gl!

you could over clock your cpu to 3ghz no prob with very little heat
just raise the fsb...your shouldn't need any voltage change

3.2GHZ is a nice figure to reach. I have managed that without having to raise the voltage at all.

You probably have a G0 by now, but to check, get the box if you haven't thrown it and check the code on the back. It should say SLACR if its a G0

everest tells you if its G0 or b3 in the underclock section 3 lines down.

and i havent needed to raise the voltage and mines at 3.2ghz and my temps are lower then your lol. so it doesnt add that much heat

Thanks for the responses guys.

According to Everest, my chip is a G0. I'm guessing that's good.


Do me CPU temperatures look normal? How about my GPU? Should I look into the possibility of better fans/coolers for these?

And (hopefully I don't get stoned for this...) can anyone actually tell me how to go ahead and overclock the CPU or the RAM? Anything specific out there that will pertain to my needs? Anyone willing to give me a small step-by-step write-up? Much appreciated....I don't want to fcuk up anything on this baby.

download nvidia ntune for the temps of you GPU. my abient if 39 and card is 50 so yours could be 10c more then i wouldnt overclock you video .

as for the overclock what speed are you looking for 3 or 3.2 . i wouldnt go any higher then that or you will need to raise vcore witch means more heat

cryman said:
download nvidia ntune for the temps of you GPU. my abient if 39 and card is 50 so yours could be 10c more then i wouldnt overclock you video .

as for the overclock what speed are you looking for 3 or 3.2 . i wouldnt go any higher then that or you will need to raise vcore witch means more heat
Click to expand...

EDIT: I did try nTune already, but my system isnt NForce supported or w/e, so I didn't bother. My GPU will prolly stay as-is; I don't think I really wanna overclock it yet.
You must log in or register to reply here.
Share:
Email Link
Top