During his keynote today at IDF, Intel's Pat Gelsinger showed off a machine based on the company's Skulltrail enthusiast gaming platform. Skulltrail is a dual-socket platform based on the X38 chipset that supports Intel's upcoming 45nm Quad-Core processors and offers PCI Express 2.0 support and true dual-x16 PEG slots (or four x8 PCI Express x16 slots). 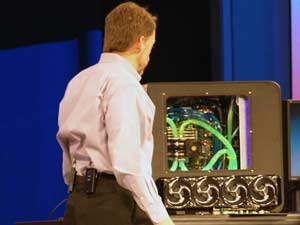 Intel's Skulltrail Demo Machine with SLI​
What was interesting about the machine on display was that it used a pair of GeForce graphics cards running in SLI mode, but on an Intel chipset â€“ no nForce here. This would lead you to believe X38 will â€œsupportâ€ SLI, but that is not exactly the case. In a briefing later in the day, Stephen Smith revealed that Intel worked with NVIDIA to enable SLI for the demo machine, but did NOT confirm that NVIDIA would enable SLI on X38 for consumers.
Update: We've just got word that Intel (and perhaps some of their partners) will be using an nForce MCP on some of their X38 based motherboards, and it's these boards that will support SLI.
Click to expand...

lol i dont know what to say to that post

so exclusivity to ATi Crossfire's on Intel Chipsets is over?