On the BIOS settings there is an option shown in this photograph. Will it be OK to change this?

I read that the computer will boot up faster using the Smart Response technology options on Windows 10. 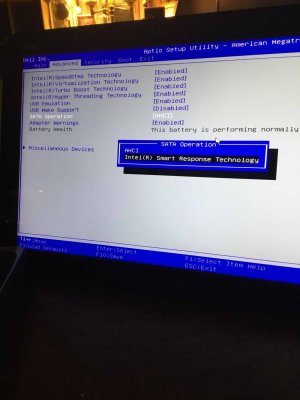 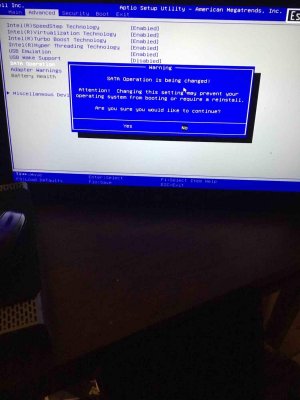 If you're booting from a spinning disk drive and using an SSD as a cache drive for the slower drive, then yes, this will help. If not for that specific use, this won't help much if at all.


Wikipedia said:
In computing, Smart Response Technology (SRT, also called SSD Caching before it was launched) is a proprietary caching mechanism introduced in 2011 by Intel for their Z68 chipset (for the Sandy Bridgeâ€“series processors), which allows a SATA solid-state drive (SSD) to function as cache for a (conventional, magnetic) hard disk drive (HDD).
Click to expand...

If that situation doesn't apply to you then you can disable it.

I'm not sure if disabling it when you don't use it will make any difference in performance though.
O

So just leave as the drive is then?

Yes is there is not any difference in performance that is why I replied to just leave the setting alone.
You must log in or register to reply here.
Share:
Email Link
Top