Here is the picture. Not sure why it didn't make the trip.

After nearly 50 years of marriage, a couple was lying in bed one evening, when the wife
felt her husband, begin to massage her in ways he hadn't in quite some time.
It almost tickled as his fingers started at her neck, and then began moving down past the
small of her back. He then caressed her shoulders and neck, slowly worked his hand down,
stopping just over her stomach. He then proceeded to place his hand on her left inner arm,
working down her side, passing gently over her buttock and down her leg to her calf. Then,
he proceeded up her thigh, stopping just at the uppermost portion of her leg. He continued
in the same manner on her right side, then suddenly stopped, rolled over and became silent.
As she had become quite aroused by this caressing, she asked in a loving voice,
‘Honey that was wonderful. Why did you stop?' To which he responded: 'I found the remote.'...
J 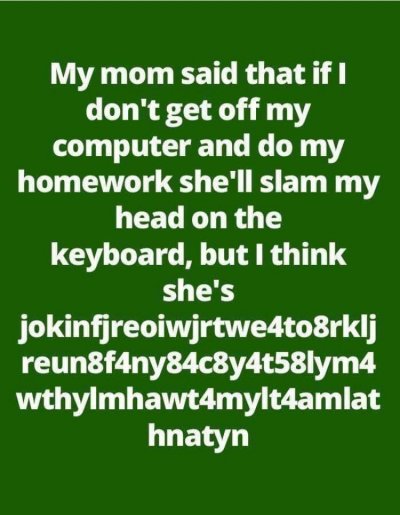 Nowadays you do your homework on the computer...
J

Russ and Fred, two friends, met in the park every day to
feed the pigeons, watch the squirrels and discuss world problems.
One day Russ didn't show up. Fred didn't think much
about it and figured maybe he had a cold or something.
But after Russ hadn't shown up for a week or so, Fred really
got worried. However, since the only time they ever got together
was at the park, Fred didn't know where Russ lived,
so he was unable to find out what had happened to him.
A month had passed, and Fred figured he had seen the last of Russ,
but one day, Fred approached the park and-- lo and behold!--there sat Russ!
Fred was very excited and happy to see him and told him so. Then he said,
'For crying out loud Russ, what in the world happened to you?'
Russ replied, 'I have been in jail.'
'Jail!' cried Fred. What in the world for?'
'Well,' Russ said, 'you know Sue, that cute little blonde waitress at the
coffee shop where I sometimes go?'
'Yeah,' said Fred, 'I remember her. What about her?
'Well, the little gold-digging bitch figured I was rich and she filed
rape charges against me; and, at 89 years old, I was so proud
that when I got into court, I pleaded 'guilty'.

'The judge gave me 30 days for perjury.'

You must log in or register to reply here.

What is your dream place for living?
2