FPS dropping when Alt+Tabbing out of games

I built my new PC 1 month ago and I was very excited to dive into my favorite games without the lag I was having with my previous build. Soon after playing a couple of games I found out that every time I Alt+Tab out of the game (I have tried it on League of Legends and Farming Simulator only for now) and then come back to it my fps drastically drops almost like the game is running as a background app and the PC isn't acknowledging that that's the Tab that I am using in the current moment. I tried to update my GPU drivers but it does not seem to work, the only thing that fixes is to change window mode to Borderless and then back to Full Screen but if I Alt+Tab again I have to do it all over and that happens every time. I suspect that it is some kind of driver/software incompatibility.

Other ways I tried to fix the problem(which obviously didn't work:
-used a driver uninstaller like Display Driver Uninstaller https://www.guru3d.com/files-details/display-driver-uninstaller-download.html and reinstall the display drivers
-set Nvidia control panel settings>manage 3D settings>power management mode>maximum performance
-checked Windows Task Manager before and after alt tabbing. Noted the usage in the Processes tab(included picture), and the usage of the CPU, memory, and GPU in the Performance tab. Set your update speed to High in Task Manager: view>update speed>high
-used an older version of the nvidia drivers -checked if I was using triple buffering in nvidia control panel
-disabled full screen optimizations for each game .exe
-disabled gsync

The only thing that fixes the problem is to make my game in Fullscreen and press Alt+Enter, when I do that the game (League of Legends) becomes Windowed Fullscreen (Borderless) while the game options are still Fullscreen. This fixes the problem but every time I lunch the game it comes back, it would mean the world to me if someone could find a permanent solution for this problem, thanks in advance. 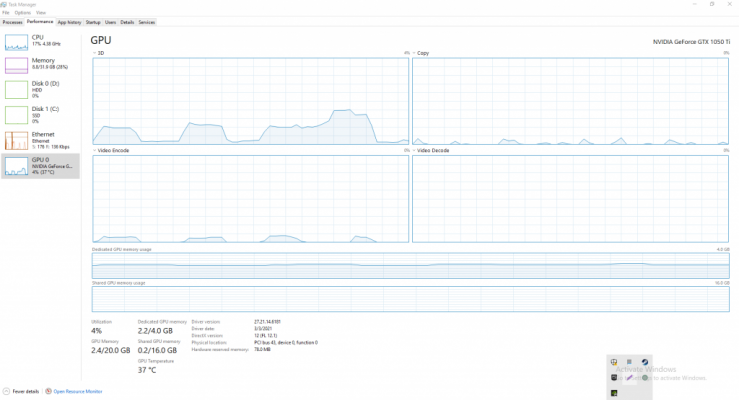 P.S: Sorry for the long post, I tried to provide as much details as possible.

Some games actually don't like it when you alt tab out. Also, if you're not playing an Epic game I wouldn't run their launcher in the background as it eats resources.
R

PP Mguire said:
Some games actually don't like it when you alt tab out. Also, if you're not playing an Epic game I wouldn't run their launcher in the background as it eats resources.
Click to expand...

In this case I am playing League Of Legends, I've been playing it for 10 years and it has never been like that even on my oldest setup, I suppose that this problem is either on nVidia or on Windows's side.

This is also a rather common issue with people using Discord, which in its own is also a resource hog. More than likely an affinity issue (or exclusivity issue) changing from focused program to another. There are two ways I get around this which is play borderless fullscreen or run the game in a separate virtual desktop. You can create a new virtual desktop and open League on that desktop. When you switch Desktop with ctrl+Windows+left (or right), then you can open Discord (or anything else) on the main Desktop and you can switch back to the 2nd Desktop. I don't have this problem with all games, but basically any game that puts the GPU in exclusive mode while in full screen will lose that exclusive mode as soon as you alt+tab. This has to do with hardware scheduling and Windows giving the app exclusive GPU access, then when you switch out and back the app doesn't have it anymore.
R

Yeah but on my previous PC I used Discord while playing too, there's no logic in having less performance on a more powerful PC which is performing under the same load as the less powerful PC.

Rontrax said:
Yeah but on my previous PC I used Discord while playing too, there's no logic in having less performance on a more powerful PC which is performing under the same load as the less powerful PC.
Click to expand...

That's not what's happening, read it again. It's an issue with exclusive mode. If you were getting less performance than the less powerful PC it'd perform worse before the alt+tab has happened.
You must log in or register to reply here.

Audio only when earphones plugged in (Laptop)