I know some computers used a blower for the CPU fan.

I want to use one for my PC CPU heatsink which can only accept a 40MM fan and cannot use a larger heatsink over 2" X 2" due to the small form factor and compactness of the motherboard. I've seen some blowers, but pretty much all that look like they would work do not have a tach wire.

The idea is to force a little more air through the heatsink than the 40MM fan can do so it cools a little better.

I currently use an 80mm fan in a cardboard box with a small opening the size of the heatsink and that cools better than the 40mm fan, but I know I can do better.

Any blowers with a tach wire preferably with the standard 3 pin PC fan connector?

Would something like this work blowing the air through the heatsink?

I do not think your asking your question in terms that are common in terms of pc tech.
I can tell that tach wire should be what is known as a 4 wire pwm fan (pulse width modulation). I have no clue as to what your referring to as a "blower"

The tach wire is what is used for all three wire and four wire computer fans to send their speed to the motherboard. Some would call it a fan speed sensor, but tach is the correct term as it is used to measure the RPMs of the fan.

Blowers aren't real common in the world of PCs as most use regular fans.

Blower is the only term I know it by and is what term is used on computer parts sites.

I may order this one and try it.

So the blower came in today.

I wound up using three 10 ohm 10 watt resistors in series to drop the speed down some as it was entirely too loud.

I then tried it on 5 volts and I got the same speed. The only reason I don't run it on a 5 volt line of the PC is because I do not have any way to do it other than make the connection permanent. Plus with the resistors if I needed to remove the fan I simply unplug it from the fan connector on the motherboard and pull it from the case where double sided tape holds it in place.

Had to pull the label off so I had a place to mount he resistors with double sided tape and I saw where the fan is serviceable as there's a snap ring and a bearing at the rear so should the fan ever start to get slow due to the grease (highly unlikely it will during the computer's lifetime) I can disassemble the fan, clean the bearings of all old grease, re-grease, reassemble and have a like new blower. 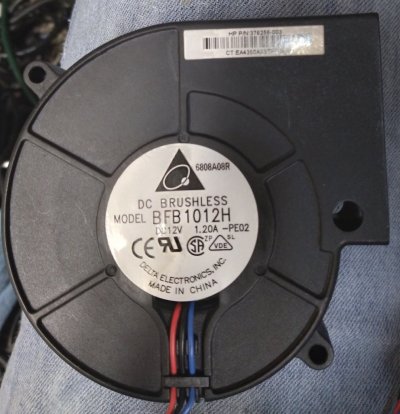 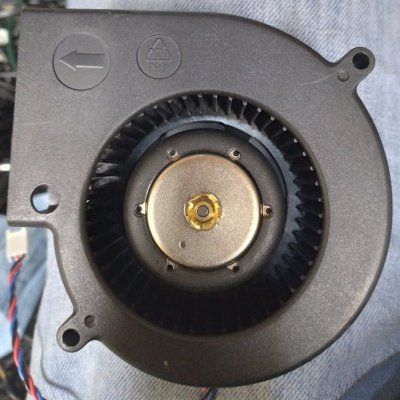 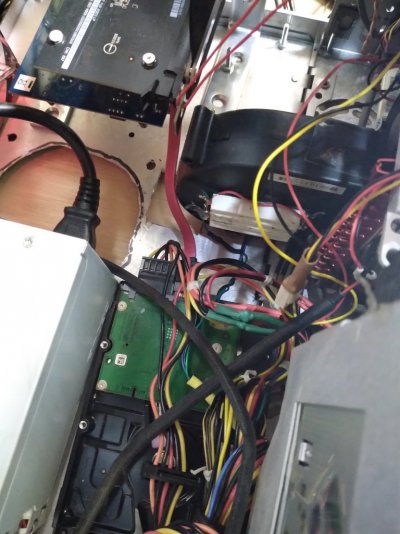 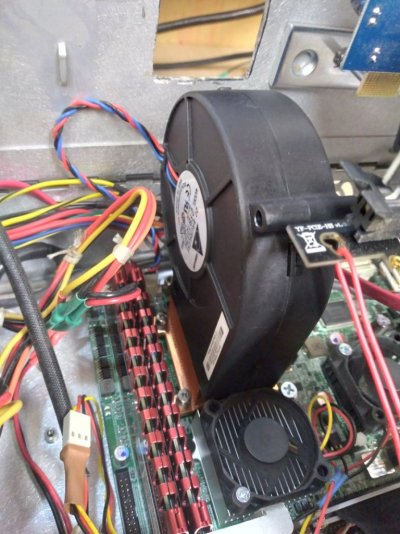 Here's the CPU temp while playing a game of Fortnite. 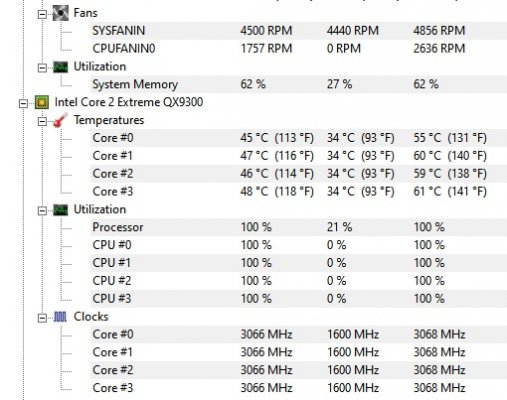 It is much better than it was with the 3" fan and cardboard box adapter I made. Also I honestly think the blower is either a little quieter or the noise has a different less noticeable pitch to it. Also at idle with the CPU at around 14% usage I am at 99F.

Overall I am well pleased.

There is a mod you can do to change the volts on a power supply molex connector without having to buy resistors or do any soldering....

Today I’m going to show you how to do a simple mod that you can use to quiet down your fans. This will allow you to use any 12 Volt fan at 5 Volts or 7 Volts.
Click to expand...

You really do not need a molex pin remover because a lot of ink pen ink cartridges are the same size as the molex pin. so you can find the right cartridge and use the end of that to remove the pin from it's holder, then it is just a matter of switching the location of the pins around
Simpler terms ....From the power supply molex wires to the fan
Black & Yellow - 12 volts
Red & Yellow = 7 volts
Red & Black = 5 volts
Last edited: Sep 6, 2021

That would work if I used a power supply connector, but the fan plugs right into the CPU fan connector on the motherboard.

Also I was wrong about it being quieter.

The window unit AC was on and it masked some of the noise. Still the noise isn't objectionable and if I wanted to make it a little quieter I could find some thin foam to put around the intake and make it in the shape of a tube.

I like that mod, although I would have used the red wire since it is the standard color in PCs for +5V.

O.K. just that there are a lot of times when you buy a fan they give you a connector for the power supply molex along with the 3 pin motherboard connector too. I've collected a bunch of those over the years....I'm sure you could buy one but I do not know if that would be any cheaper than the resistors, but it would be less time consuming to install

Agreed if I didn't want to monitor the RPMs of the fan, but a lot of the three pin to four pin adapters do have a tach wire that plugs into the motherboard fan connector for RPM monitoring.

The CPU fan connector is the 4 pin PWM so it can support a PWM fan.

The other motherboard fan connector is three pin.

At one point a long while ago (1-2 years) I ran a program and could access the fan speed controllers, but nothing I did would cause any change in the fan speed so maybe the program didn't work or the motherboard locked the fan controller so nothing could be changed.
Last edited: Sep 6, 2021

It is possible to remove the pins for the fan connector from the fan to the motherboard. But you'll need a second fan connector to plug the "tach" wire into the second connector and use that on the mother board and keep the original fan connector for the 4 pin molex adapter. You can remove those pins using a dental pick that you can get at your local pharmacy. You lift up a tiny plastic tab on the connector for the fan wires carefully so as not to break it and then the pin will slide out. Or sometimes you use the dental pick to push in the little metal tab in the connector to release the fan pin. Depends on the type of connector you have. I've done mods like that before.
Last edited: Sep 7, 2021

The board is from 2010 so probably not much luck in my case.

Can't even detect the fan controller with speed fan, but at one point I thought I remembered it detecting it.

The other identical PC I originally installed a transistor and variable resistor so that the stock 3 60MM case fans could be slowed down as I originally used it to record audio at church and the fans were loud at full speed.

So if I get another of these blowers for it I will connect the blower to the output of that and the 5" case fan I'll install a 50 ohm resistor in series with it so that it runs at the same speed and run it off the +12 volt line.

I could easily add a variable resistor and transistor to this blower so I have a variable speed control.

However I just found this.

I'd need to remove one of the 10 ohm resistors on the fan though.
Last edited: Sep 7, 2021
You must log in or register to reply here.

A
Computer booting up when I turn on fan in other room?