Personally I use a sinewave to see how good an audio device is as the sinewave on the output should still be a proper sinewave and if it is not then the device is doing something undesirable to the signal (except anything guitar related where distortion ETC... is desired) and means the device isn't good or needs repair or in the case of a DAC is cheap.

Tried the Schiit at work today.

At first it sounded like I had turned the treble control down, but then I realized I had been used to the FiiO with its slightly boosted upper treble.

As the day went on the Schiit sounded better and better. 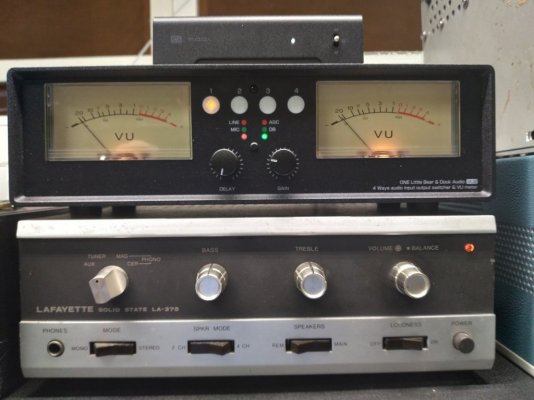 Maybe three weeks ago I took and found a source of switched 9 volts in the VU meter then added a 5 volt relay in parallel with the power switch in the amp. I did it that way so I could turn the amp on with its power switch if so desired. Because I do not use the record out jacks, I repurposed one of those for the 5 volt input to the relay coil.

I added an RCA jack to the VU meter which has the 9 volts going to it through a resistor to drop it to 5 volts when the relay coil is connected. I put the resistor there so that if for some reason there is a short I'm not shorting out a 9 volt supply, but am only causing 9 volts to be put across a resistor.

That way the whole thing turns on and off with the power button for the VU meter.

I also used a toslink cable to connect the DAC to the audio extractor. That way there's no electrical connection between the PC and stereo. I did not have a ground loop issue, but felt that would be better to keep them isolated from each other.

Plus that leaves the coax input for the idea I had with using an older CD ROM drive with a play pause button on it to serve as a CD player.

I could have used the DAC as a sound card, but IT would have to install the drivers and technically the work PCs aren't to be used for playing music anyways so they would have a big problem with that.

I was sort of expecting the Schiit to be larger than it is.
Last edited: Sep 9, 2021

Yup so far it is good.

I've got a question.

Are there any HDMI audio extractors that can do more than 24 bit 48 kHz?

Will try it tomorrow when I'm back at work.

Not sure if I'll notice a difference though.

Ok I have a problem.


I connected the stellar labs hdmi audio extractor up just like the Amazon Basics one and windows 10 would not detect a second display or an audio device no matter what I did.

Any idea what the problem could be?

Here is a .pdf link to the manual... dunno if that'll help, but it does explain all the connections.
https://www.farnell.com/datasheets/2365726.pdf

What source is your HDMI input coming from?

I can get it to where either the audio device shows or the monitor works but not both at the same time.

Also the maximum bitrate Windows shows for the device is 24 bit 48kHz and not the 24 bit 192kHz the manual says it can do. Could that just be a limitation of the motherboard video?

I can try it on my home PC today and see if I get more than 48kHz bitrate as an option as I have a decent PCI-E video card.

Human hearing is only 20 hz to 20 khz, (we are not like dogs when it comes to hearing) CD audio quality is double that at 44.1 khz. Do we really need 192kHZ @ 24 bit?
Read this: https://homedjstudio.com/audio-bitrates-formats/
I personally recommend that you listen what sounds best to your ears and forget all those numbers. I reckon your one of the few that has to know by experimenting with every thing first before you'll know what you like best.
Last edited: Oct 19, 2021
You must log in or register to reply here.